We all know the famous magic words “Open Sesame” spoken by Ali Baba who defeats 40 dangerous thieves with the help of his canny donkey.

Now this timeless story of Ali Baba and the 40 thieves is presented in an actually very new way, namely as a threefold work: for one we have the musical highlights from the children’s opera, then the thrilling adventure is read out aloud and last but not least colourful pictures capture the oriental setting of this most famous piece of Arabic literature.

In 2012, the Komische Oper in Berlin assigned Taner Akyol, a Turkish composer from Berlin, to write this children’s opera. It is based on the libretto by Cetin Ipekkaya and Marietta Rohrer-Ipekkaya and the book is illustrated by well-known Regina Kehn.

By the same artist

Frieda in the Bottle

Flo’s family-holidays promise to be the worst ever. But then she discovers a mysterious bottle under her bed. In it lives a tiny plump greenhaired woman named Frieda. Freaky Frieda ... 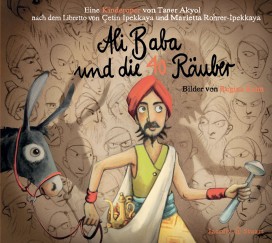 Taner Akyol was born in Bursa (Turkey) in 1977. Even as a schoolboy, he performed with the Balama, the Turkish lute, and his violin. In 1996 he moved to Berlin to study composition. He completed his education as master-class student in 2006.

Cetin Ipekkaya was born in Diyarbakir in 1937. As a series actor, he is well-known to viewers of German television. He also works as director and author.